I was doing some research to see if a book listed on eBay was worth a bid (it wasn't), when I came across some interesting photos of Steamboat Springs, Nev. The first three were taken by Don Hudson in 1986, a year before testing began on the powerplants that eventually destroyed the geysers there. I met him on the terrace one day during the the activity of 1986-1987, maybe even the day these photos were made. Note also that I might have some of the feature number wrong, as it has been a couple of decades since I last saw these geysers. I did check my maps, so I got at least the names of what I think they are correct. 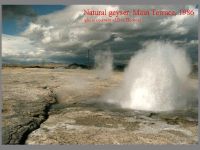 In the foreground is #41, while in the background the center of steaming is most likely #39. Both were quite active during that time. As you can see, much of the runoff of #41 went down into a nearby fissure. Many of these fissures were filled with rubble and debris, but when cleared, they were several meters deep. The previous year the Strassers and I visited the terraces around the end of June when #41 was dormant. Because of the high angle of the sun, one could catch a glimpse of a reflection of water about 3 meters down in the vent. 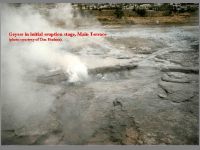 I believe this is a close-up of #102 in eruption. Its vent was not marked on the 1950s Don White maps we used, so I gave it a new, three digit number. It was the only geyser along the top of the terrace which had any sort of pool. The other geysers were often just wide spots in a fissure, or a void in rubble filled fissure. Like nearby #39, which was a a long fissure, this feature appeared to erupt continuously during the several hours of several different visit.s But since the activity here only lasted about a month, I believe it qualifies as a geyser, just one with a very long duration.

Here we have minor activity from the fissure vents of Geyser #42. Over to the left, and not visible, is the vent of #42w, the tallest geyser we observed in all our visits. The main vent of #42 is in the large, wide southern end. Both #42 and #42w could be induced to erupt, both together and separately. On most visits, the first activity we'd get would be a simultaneous eruption of #42, with solo eruptions of #42w afterwards. But on at lest one occasion we did get a series of eruptions of #42, but nothing from #42w. Even during a major eruption, the little sputs you see here didn't get much taller, although they did turn into little columns of suds about a foot high.

In the background you can see the white fresh sinter and dark runoff that surrounded a string of geysers and springs, #12, #13, and the various vents of #14, #15 and #16. Back in the 1950 White reported geyser activity from the first two, while we observed sputtering from a number of vents from #15 and #16.

Finally, here are a couple of 1867 photos which show how little the look of the surface features had changed over a century. That road now appears to be bordered to the left by Steamboat Ditch, a channel that diverts water from the Truckee River to Steamboat Creek, with the features of the first two photographs located in the vicinity of the middle of the leftmost fissure.

So the camera was down for a few hours. When it finally came back (or at least, I was able to check and see it was back), what was I treated to? The camera operator focusing in on some dancing fools with cell phones. (13:18 on 16 Oct to be precise.) I've noticed more and more lately that the camera operators have been zooming in on people, like later that afternoon on a couple with the two large dogs walking away from the camera after an eruption. It's getting kinda creepy, actually. And not in a good way. 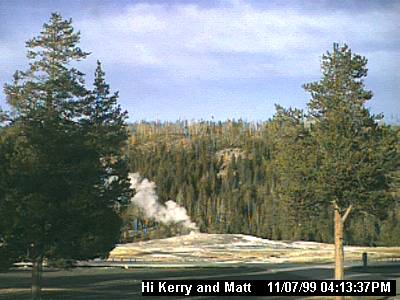 When the still camera went online years ago, some morons at the VC thought it would be cute to change the OF prediction to say "Hi Matt!". They were treating the camera as a personal toy, and this is no different. I watch it to see geyser activity, not to see people playing games with it, not to snoop on people minding their own business, and definitely not to see people make fools of themselves. And in this case, make fools of themselves with the help of the NPS.

Why do I complain about this? Keep it up and there's going to be an incident that gets this camera turned off. Anybody remember the advertising fiasco? The NPS's first reaction is to always panic, assume the worst, and then to clamp down. By focusing in on friends acting stupid, the camera operators are only making sure that that incident, and a reaction to it, becomes more likely.

All posts written by: H.Koenig