Today I came across a short article in The Los Angeles Times from late 1989:
Geyser gazers who watch over Yellowstone's natural wonders consider it a labor of love.. Mentions and quotes a number of gazers from back then, including Mary Ann Moss, Herb Warren and Paul Strasser.

As far as I can tell, it gets the facts right, and doesn't make fun of its subject.

After checkiing out, stopped in the store parking lot. Realized that Grand hadn't erupted, just as we saw the steamcloud rising from its location. Went out anyhow since it was a cold, dead calm morning. Got to Sawmill Group in time to see the end of the long second burst, and to see Vent and Turban quit.

Also saw that there were frozen puddles in some of Sawmill's runoff channel. Not sure what to make of it. Perhaps the water nearer the vent was too warm to pool and freeze, or maybe something else is going on there.

Today started like yesterday. Temperature was in single digits when we arrived at Norris, and there were a couple of tour buses in the parking lot. Unlike yesterday, the tours were visiting the Back Basin instead of Porcelain Basin.

Set up on the upper platform again in anticipation of it eventually getting sunny, although that turned out to be several hours away. New Crater/Steamboat was more active than yesterday, but during those cloudy hours, it never had a good minor. (A good minor is one where it's time to use the camera.) Eventually clouds and fog broke and it started to warm up. Around noontime, moved down to the lower platform, as I can't tell what the South Vent is doing from the upper.

The activity did pick up a little, but it wasn't until 13:27 that it had a minor that showed that there was eruptive potential. That was followed four minutes later by another one, and then they started coming about ten to twelve minutes apart. All during this time the activity of the minors was concentrated in the North Vent, with the South not quite as strong as before other eruption.
But at 14:11, a minor started and built, and at 14:12, we got the eruption.

Both vents climbed slowly to full height, and were clean for the first minute or so. Then the fun began. North turned reddish-brown, and began spewing out rocks. Large rocks thrown to great heights. More rocks than I've seen in all of the five previous eruptions. After a few minutes, the water there seemed so thick that the North Vent was only erupting 10 or 20 feet high.

When I was down at the runoff, I saw (and recorded) a large chunk of reddish mud plopping onto walkway. Surprised me, because I didn't think rocks would be flying that far, so it was probably thrown there by the torrent of water coming down the channel.

There was very little wind, and what little there was had the steam column drifting away from us. Because of this, later in the eruption the condensing steam made for nice rainbows which seemed to appear on either side depending on where the wind was drifting.

Ended the day by going out at sunset for one last One Burst Grand. Got there in time to see a Turban delay, so it was a Two-Turban Delayed One Burst Grand eruption that we eventually saw. The temperature was about 26°F, which was about the same temperature at which we saw New Crater/Steamboat last week.

Left the Old Faithful area where the temperature was 8°F and arrived at Norris at sunrise. Was probably even colder there. Turns out it is possible to sit and wait for a geyser at such temperatures, if you have a couple of blankets and are wearing lots of layers. The day never really got above freezing, although some places in sunlight did dry out a bit.

New Crater had some good surges early in our wait, then nothing much happened until a hour before we planned to leave. Even this activity wasn't encouraging, as I only got the phone out just in case, but never started recording. So it was mostly 9 hours of killing time. 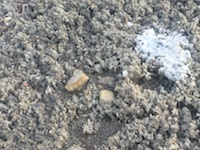 Years ago I came across an interesting phenomena of hot ground, and encountered it again today. When warm, damp ground encounters frigid air, frost develops underneath pebbles and particles lying on that ground. That ice in turn causes the frost to grow, from the bottom, slowly pushing the top of the frost column up. I found large patches of this frost over by Echinus, on both sides of the boardwalk.

Nothing much happening with New Crater. Spent an hour and a half there and did see some strong surges, but they were separated by minutes of nothing happening.

It was after we left that things got fun. It was snowing heavily, but I thought things were okay until we got to the cutoff that rises up on the hillside where Tanker Curve used to be. There was a line of cars stuck there, unable to get up the slope. It was a mess, and we ended up spending an hour waiting because we had no idea if this was a local problem, or the end of a long line.

Tried to get past once, and some foreign idiot in a rental cut in front of us and immediately lost traction. Once we got past, it was clear all the way to Madison. There we talked our way past the barricade crew by saying that we had a cabin at Old Faithful and all our stuff was there. I think they were there more to keep the idiots from getting in deeper, and by the way I was dressed, and the vehicle I was driving, I showed that I might know what I was doing.

So it took the better part of two hours to get back. By then it was time for Grand.

Unlike the rest of the week, it was windy. Which, despite the temperature being just at freezing, made it the most unpleasant time we've had this trip. And the wind kept shifting during the One Burst Grand eruption. Often we could see the tops of the jets above the mass off steam coming off the runoff and Vent, other times it was just a mass of steam.

Again it appears that there are changes in the Sawmill Group. For the first time in two years that I can remember, I saw Churn below overflow. Again there appeared to be gaps in the snowcover where Sawmill's runoff channels used to be.

Despite it being mid-afternoon on what was now a sunny day, we just weren't in the mood to be out in the weather any more. So tomorrow it's back to Norris, unless something happens overnight there.

Knew that today was going to be fairly uneventful, a good day to catch up on other things besides Giant. It was cloudy at first, but cleared and when the sun was out, felt warm, especially when the wind died down.

Got up early again to catch the morning One Burst Grand eruption. From there, it was down to Fan & Mortar to see if it had erupted, and wait around a while since it hadn't.

From there it was on to Fountain, where it was obvious nothing was going to happen any time soon. So we looped around past Great Fountain, where we had to stop because it was in overflow. There were some nice sized bursts, so it wasn't totally a Flounder.

Back in the Upper Basin it was time for both Grand and Beehive. But first, saw Aurum from the parking lot. Then went over to Geyser Hill and ended up seeing Castle instead. Over at Grand we heard someone call Beehive during the One Burst Grand eruption. Sounds like either no one saw the Indicator, or there wasn't one.

The One Burst Grand was a bit of a weird eruption. It was obvious that we were having a delay, and it was so steamy it was hard to see the pool. Then I saw a nice boop boil over the vent, but nothing much happened after that for about half a minute. Then, in quick succession, there were several more boops, one maybe two meters high. Then the pool was quiet. It was another minute before Turban finally started, and it didn't sound all that vigorous. But it got stronger, and it looked like Grand's pool was getting steamier. Finally it became obvious that we were getting waves, and about to get a delayed eruption start.

Finally went back to Fan & Mortar where nothing much happened, again. 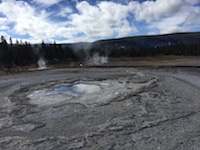 Over the last few days, it seems to me that there's been evidence of some sort of over-trickle from Sawmill. The way the snow was melted was one sign. Another was that today there were wet spots and pools in the runoff channel, long after the snow had melted. The photo is an attempt to show this. Unfortunately, this is about as high a water level as I've seen, but this past summer, I never saw any evidence of any water down those channels. (Maybe it's just wishful thinking...)

All posts written by: H.Koenig